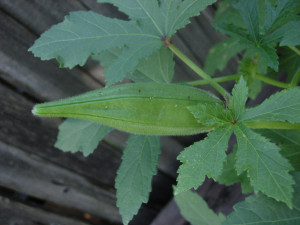 A helicopter crew working for the Georgia state police found what appeared to be highly suspicious plants growing on a man’s backyard garden in the state. The state mobilized the Governor’s Task Force For Drug Suppression and a squad of police complete with K9 drug-sniffing dogs arrived at the property, prepared to make arrests for drug cultivation.

The suspicious-looking plants turned out to be okra, a common plant that produces edible seedpods common in southern cooking.

Embarrassed police officers eventually apologized and left, but not without first collecting some of the leaves for “analysis” due to their suspicious (albeit questionable) resemblance to marijuana. The officers reported on TV that, “we’ve not been able to identify it as of yet. But it did have quite a number of characteristics that were similar to a cannabis plant.”

The amount of money spent on these kinds of drug eradication programs are good cause for taxpayers to be suspicious on state- and federally-funded wars on drugs that include massive hauls of mostly non-psychoactive greenery. According to the DEA, more than 98% of all marijuana plants seized is feral hemp, otherwise known as “ditchweed,” and not purposefully-cultivated cannabis. Ditchweed is so named because it appears to be growing wild with no evidence of planting, fertilizing, or tending. Plus it contains virtually no detectable levels of THC, the psychoactive chemical in marijuana responsible for the “high.”

If you or a loved one are charged with a crime, contact Orange County criminal lawyer Staycie R. Sena immediately at (949) 477-8088.