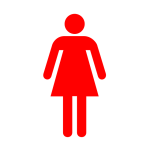 The owner of a bar is defending the presence of a 2-way mirror in the women’s restroom of his Illinois establishment. According to the owner, the mirror is part of a “fun house gag” and is not a crime.

A female comedian who was waiting to perform at the bar reportedly noticed the full length mirror placed directly across from the toilet in the women’s restroom and decided to record what she found. The mirror was hanging on a door which led to a closet. Once inside the closet it was evident that a hole had been cut in the door, enabling the toilet area to be seen through the back of the mirror.

Berwyn Police Department were notified and examined the two-way mirror in question. According to the owner, the police saw nothing wrong with it. The department has not commented about their investigation.

According to the establishment owner the mirror has been in place for 15 years and has never been an issue. Originally there was a monster behind the mirror which would light up and “scare” the women inside.  The owner reportedly states that women would check behind the mirror covered door  and upon seeing that no one was there, would use the restroom without issue.

If you or a loved one is accused of an invasion of privacy crime, call Orange County criminal lawyer Staycie R. Sena immediately for a free consultation at (949) 477-8088.