On November 6, 2012, Californians voted in favor of Proposition 36, a ballot measure that allows for shorter sentences for some third-time offenders of the controversial “Three Strikes Law.”

Three Strikes has also been criticized for overburdening the California prison system, costing taxpayers to pay for the cost of incarcerating aging offenders that pose no significant threat to the public, and disproportionate outcomes, such as a shoplifter being more harshly sentenced than a murderer in certain circumstances.

The passage of Proposition 36 leads to some important changes to the California Three Strikes Law: it revises the law to impose a life sentence only if the third felony conviction is “serious or violent” and offenders currently serving life sentences for minor third strike offenses are eligible for re-sentencing if the judge determines that the re-sentence does not pose an unreasonable risk to the public.

If you or a loved one is charged with a crime that falls under the California Three Strikes Law, or is currently serving a life sentence that could qualify for re-sentencing under Proposition 36, contact criminal lawyer Staycie R. Sena immediately at (949) 477-8088 for a free consultation. 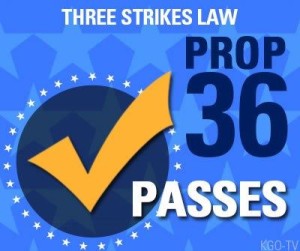