Ecstasy pills in the shape of Donald Trump’s head were allegedly one of the substances found in a man’s apartment during a search after the authorities suspected he provided drugs to a person who suffered from an overdose.

On Friday afternoon, the Clearwater Police were notified by a man about a person who overdosed from taking heroin while visiting his apartment.

Officers dispatched to the address, where 23-year-old Brendan Dolan-King currently resides. They asked Dolan-King if he would allow them to inspect the inside of his apartment and the man allegedly gave his permission for them to enter and do so.

While looking inside one of the air vents in Dolan-King’s home the police reportedly discovered a tan powdered substance, and five bright-orange pills pressed into the shape of the caricatured head of Donald Trump (see photo below). 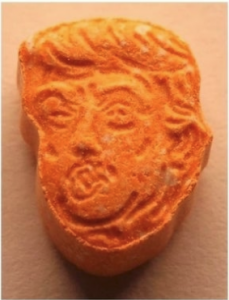 Dolan-King allegedly disclosed to the officers that he had called to report the overdose in case he “was possibly the person” from whom the man received the heroin which caused the OD.

After being taken into custody Dolan-King was charged with felony possession of fentanyl, MDMA, marijuana, cocaine, and cannabis oil, and his bond was set for $2,000.

The powder and Trump tabs allegedly discovered in the air vent at the apartment were sent to the lab for identification testing. Upon receiving the notification of the results the authorities reportedly learned that the substances were positively identified as heroin and MDMA.

If you or someone you love is suspected of a drug crime, contact Orange County criminal defense lawyer Staycie R. Sena at (949) 477-8088 for a consultation now.